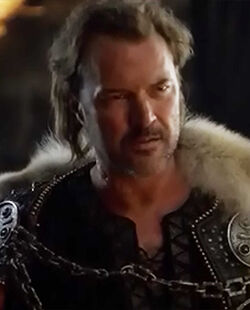 King Uther Pendragon was the King of Britain. He was the husband of Morgan's Mother and Igraine Pendragon, as well as the father of Arthur, and Morgan. Before his untimely death, Uther was seen as the greatest and most respected King of Britain, yet many also saw him as a tyrant for the many atrocities he commited.

When the wife of the Duke of Cornwall captures his attention, Uther goes to war with the Duke in an effort to take Igraine for himself. Unable to best the Duke in battle, Uther turns to the sorcerer Merlin to alter his appearance to that of the Duke. Under this disguise, Uther sleeps with Igraine and conceived Arthur. Having killed the Duke, Uther claimed Igraine and made her his wife and killed Morgan's mother to make it possible. He later also banishes Morgan to a nunnery for 15 years, because she rejected his father's actions and rejected her, when she returned. Angered, Morgan poisoned him.

Uther was ruthless and very dangerous. He killed and tortured everyone who stood in his way. He even did not hesitate regarding his own family, killing his wife in order to marry Igraine and banished his own daughter to a monastery just to impose his will regarding this matter. He was also very respected as a warlord and a king.