The men are erecting flags to mark King Arthur’s territory. Kay explains that this signifies protection to the people who sees the flag, as they are in Arthur’s land. Merlin rides up and says that they have something more important to do, like going to Kay’s old home to retrieve the books that his father collected because Merlin believes that knowledge is power and extremely valuable.

King Arthur is giving orders to improve the castle’s condition, when Bridget approaches him frantically, telling him that Guinevere has rode out by herself. Speaking with the messenger for Guinevere earlier, they finds out that she has gone to visit her dying father. With a shortage of men and worrying for her safety, King Arthur rides to follow her.

People are flocking to Morgan’s castle, wanting her to address their grievance. Her first case is about the custody of a boy.

King Arthur catches up to Guinevere. A villager cautions them to stay off the dangerous forest, and complains that the new King is not doing his job as there are always attacks, and their situation is not improving. Arthur insists on accompanying Guinevere, saying that he is doing it for Leontes and that he is done with the past. The ride is silent, as King Arthur is contemplating the words of the villager and wondering how he can change things.

Sybil questions Morgan on not using her new found powers. Vivian approaches and tells Morgan that there is an insistent woman who seeks an audience, warning that she is in terrible danger. Morgan meets the veiled woman and she states that Morgan of harbouring a devil. The woman removes her veil to reveals scars down the right side of her face. She relates her story, saying that her daughter was in the nunnery when it burned. She accuses Sybil of starting the fire that burned her daughter alive because when she escaped, she saw Sybil hiding. She declares that she wants retribution for her loss, desiring Sybil’s execution.

Merlin tells Gawain that he cannot prevent death or resurrect the dead. He provides some insight into his powers, telling them that he can shape the elements to his will to a certain degree. However, there will be a cost on his body, his soul, and the people around him. This is why he denies himself his power.

Morgan is terribly upset at the untimely bad news just when she is getting off to a good start. She is furious that Sybil is not truthful with her, and decides to have a public hearing. Vivian tells Morgan that Sybil asks if she could see her but Morgan refuses.

Merlin’s party arrives at Kay’s home but the books are gone.

Sybil’s hearing has started. She steps forth to tell her side of the story. There was a ritual to be held where a girl would be selected. Knowing that the priests were coming to look for evidence, she burned them and the fire got out of control. She jumped out of a window to save herself and admitted that she is haunted by the death of the veiled woman’s daughter.

Guinevere and Arthur arrive at her father’s place, where he is barely holding on. Guinevere accompanies him for a short moment, repeating the story that she was told by him while he dies.

Gawain does not understand why Merlin is not using his powers to aid King Arthur, when he is urging many others to do the same. Merlin confesses that he loathes his power; it terrifies him and pulls him over to the dark. Gawain tells him that everyone will struggle with something and that he should embrace his powers, believing it would be of tremendous help to Camelot.

Guinevere receives her father’s cloak and prepares to leave after thanking the people who was there for her father.

Kay sees a blurred image of his father and follows it, finding a trap door where he and Arthur used to go. Entering it, he finds tons of books that were hidden by his father. Leontes asks Kay how he knew where to look and Kay smiles, looking to Merlin. Merlin saves him from answering by saying that “we got what we came for,” referring to the books and in Kay’s case, closure. They head back home to Camelot.

Leontes rides on ahead of the others. He dislocated his shoulder when a deer frightened his horse and it threw him off. He refuses to let Gawain to fix it. Merlin distracts him by using his powers, making the leaves combust as they fell and whispers to Gawain to take the opportunity.

Morgan has reached a decision and burns Sybil’s hand in front of everyone. However, the woman is not appeased, still wanting Sybil to be executed. Morgan tells her to take it, or leave.

Looking at Camelot from a distance, Arthur promises Guinevere that he will make it a place to be proud of and they kiss.

Arthur marvels at the books that was retrieved and compliments them, saying that now they have a place to think. Leontes thanks King Arthur for taking care of his wife on the journey.

Arthur: "How was your swim? Was the water cold?"
Guinevere: "Freezing. But I have to swim."
Arthur: "Why?"
Guinevere: "To forget myself. To lose the world for a moment."
―Guinevere telling Arthur the reason behind her swimming

Merlin: "The cost would kill me."
Kay: "What sort of cost?"
Merlin: "On the body. The soul. And those around me. It's an addiction. One which I deny myself every waking hour."
―Merlin letting the others know more about his powers

"We all have our own ideas of what death might be. For all we know, death could be the greatest good that could happen to us. Cicero said, "The life of the dead is placed in the memories of the living". The love we feel in life keeps people alive beyond their time. There isn't a day my parents aren't with me. In my memories, and in who I am. Anyone who has given love will always live on in another's heart."
―Arthur's speech on death

Merlin: "Did I hear of plans to rebuild the roof?"
Arthur: "No, I've changed my mind. That roof must never be sealed. Never built over. If we look up and see the sky, we'll never forget who we're serving. Never be disconnected from the world outside."
―Merlin and Arthur on plans for the roof 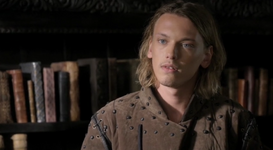 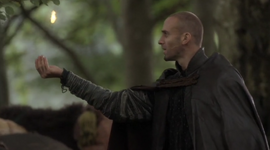 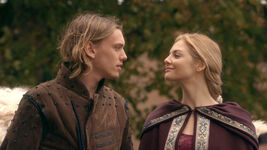 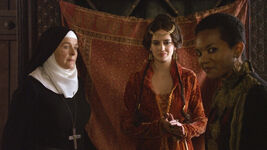 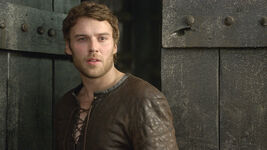 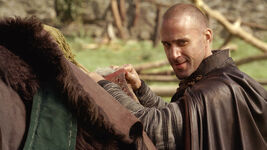 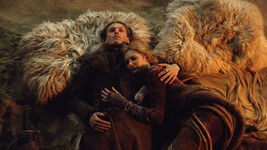 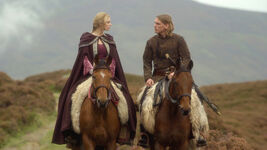 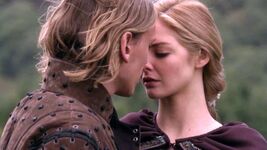 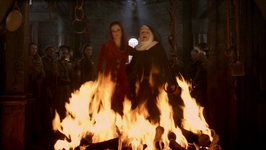