Morgan is practicing her shape-shifting abilities while submerged in her bathtub. When she rises and dries herself, one of her guards is seen peeping at her nakedness from outside. As the guard watches Morgan step out of the tub, he is shocked to find her suddenly standing beside him, catching him in the act. He declares his love for her, and insists he is willing to do anything to prove it. Morgan brings him to see Sybil, and he introduces himself as Harwel. Morgan has once again invited King Arthur and the others to her castle, wanting to exploit his desire for a family.

Kay has misgivings about the visit and warns King Arthur. However, Merlin is looking forward to it, wanting to take the opportunity to find out what Morgan is planning. Also, he misses the place, and thinks that a feast would be beneficial for all of them.

The feast commences, and Igraine comments that Merlin should not be sitting beside her, seeing as to how he had been avoiding her for days. Morgan toasts to King Arthur, wanting to heal their past and start afresh, declaring her loyalty and offering her love and devotion. Igraine asks Merlin if he trusts Morgan, saying that she covets Arthur’s throne. Morgan calls for entertainment and dancers in skimpy clothing appear. Nearing the end of the dance, the dancers get behind the men’s chair and unsheathe their swords before stabbing it in between their thighs, causing some tension.

Fire tipped arrows come sailing through the air, causing the hay roof to go up in flames. People help to retrieve water to put out the fire while Arthur bravely rescues a girl trapped on a higher floor with the help of his men and a cart.

Merlin suggests that the attacker could be Aldwulf. Leontes explains that Aldwulf is a warrior king from the east, and an old enemy of the late King Uther who has attacked numerous times. Morgan offers Arthur her men to command. Kay thinks that they should leave and head back to Camelot but Arthur refuses to leave Morgan vulnerable to the attack. Kay sends out scouts and tells them to be back by dawn.

Guinevere, Igraine and Bridget are talking about the men's attitude towards battle. Igraine tells them about the way the men work, and advises the women not to doubt them. Sybil and Morgan observe that Guinevere and Bridget are very attentive to Igraine.

While preparing medicine and bandages, Guinevere and Morgan talks about marriage. Later, they talk about Arthur and when Morgan says that Arthur is sure to have a queen soon, Guinevere seems upset, and rips the bandages with more force than necessary.

Merlin chances upon Sybil and tells her that he has been hoping to meet her. He comments that the castle seems to be unsuited for a nun and Sybil replies that faith is needed everywhere. Merlin subtly wonders if she has anything to do with Morgan’s power, seeing that they are both from the nunnery. When he asks Sybil what Morgan received in return for offering her sanctuary, she just smiles and walks off.

A wounded man approaches the castle on horseback. He is the scout and he reports that Aldwulf’s men are to the east, making preparations to attack the castle with a force enough to crush the castle. Morgan gives the order for her men to attack without consulting the others. Gawain bluntly tells her that it was tactical suicide. They head inside the castle to plan. Morgan suggests she can provide a diversion while Arthur heads back. Merlin tells Arthur that maybe he should, because he cannot accomplish anything if he is dead, but he refuses.

Gawain tells Leontes that he is leaving to find and kill Aldwulf, preferring fighting to waiting. Leontes orders him to stay but he dismisses it, resenting Leontes giving him orders. Leontes tries to stop him and they fight, drawing a crowd. Before it can proceed further, their fight is broken up by King Arthur, who wants to know what is going on.

While talking about Morgan and the events that are unfolding, Igraine asks Merlin why he doubts everyone. After confirming that she wants to know, Merlin shares with Igraine his knowledge of how and why Morgan killed Uther. Merlin tells her not to let Arthur know because no good will come out of it.

Sybil finds Leontes praying in a room. They talk about faith and Leontes shares with her his fear; Guinevere being taken from him as retribution for his sins.

Not wanting to leave anything unsaid for the future is uncertain, Arthur seeks out Guinevere in private. He tells her that although he would not do anything to break her marriage, he wants her to know that he loves her. Morgan listens to their conversation, hidden in darkness.

Sybil, Morgan and Vivian share their findings from eavesdropping and spying on the others. Morgan tells them that she has found the reason for her gift.

A few riders return, having defeated most of the enemy. Arthur thanks Morgan and invites her to accompany them back, but Morgan declines, saying that her place is here, and she has to bury her warriors.

Igraine is leaving to join the others when she is stopped by Morgan. Morgan wonders what is it about her face that makes men weak. Igraine joins the people waiting for her and they leave for Camelot.

Sybil gives Harwel orders to recruit people to attack the outpost at Bardon Pass to draw out King Arthur, and show him no mercy.

On the ride back, Merlin asks Igrain if she is alright and she replies that she is just tired from the long night.

Sybil walks and turns into a heavy guarded corridor. She enters a room and Igraine is there, manacled. This reveals that the Igraine that is on the way back to Camelot is actually a fake; Morgan in disguise.

"Right now, they are full of planning and action. But soon, they will stop and think. And that's when they will come to us. To remind themselves of why they will fight. And if we doubt them, then they will doubt themselves, and the battle will be lost."
―Igraine to Guinevere and Bridget

Sybil: "Your faith comforts you?"
Leontes: "It does."
Sybil: "A good thing on a night like this, when doubts assail us."
―Sybil to Leontes on his faith

Leontes: "Morgan's men have claimed a famous victory."
Merlin: "Her legend grows."
Leontes: "You doubt her?"
Arthur: "He doubts everyone. It's his way."
Gawain: "Keep up the whole inscrutable man of magic thing."
―The men on Merlin's personality 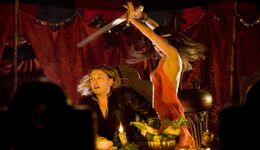 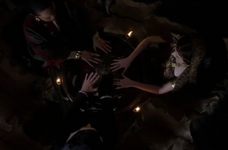 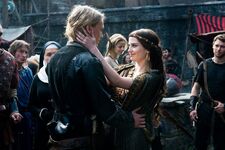