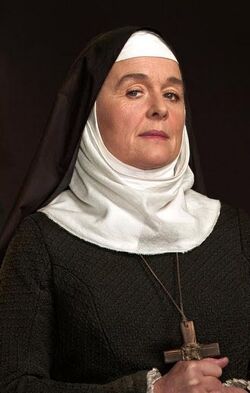 Sybil was a nun, who raised Morgan in a nunnery and lived with her afterwards, acting as a motherly figure for Morgan. She acted as an advisor to Morgan, helping her plot against King Arthur. She takes the blame for Morgan's treason, and is beheaded by Gawain.

The origin of Sybil’s power remains a mystery. However, she was the one who took Morgan under her wing, and taught her how to brew potions, cast spells, summmon spirits, and shapeshift.

Though Sybil does not seem to have specific magical powers she clearly knows pagan rites and magical techniques and spells. Along with knowledge of the arcane, knowing what Morgan was going through when she over used her powers.