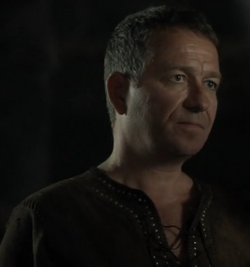 Sir Ector was the father of Kay and the adoptive father of Arthur Pendragon.

Merlin brought Arthur to Sir Ector and his wife when he was about a week old. Ector took care of Arthur and raised him with his own son, Kay, until Merlin showed up after King Uther's death and took Arthur and Kay with him, so that Arthur could become king.

After his sons' mother was killed by King Lot, Ector escaped captivity and reunites with his sons at Camelot, where he took care of his sons once more. When King Lot and his men attacked Camelot, Ector avenged his wife by killing Lot, but in doing so, he was also killed by Lot himself.

"Together you are stronger."
―To Arthur and Kay