At Bardon Pass, King Arthur kills a scout. He sets to work, constructing a variety of traps to deal with the enemies.

At the ruined building where they are taking shelter, Gawain realises that Arthur had stayed behind to prove himself to them.

Wallace tells Harwel that the scout had gone for too long, and he replies that it is now Wallace’s turn. Taking a few men with him, Wallace moves towards Arthur’s residing place. Arthur kills a few men before his feet are tangled up and he falls. His sword is taken from him, and Wallace says that he will finish off Arthur. However, he frees him by accident instead, and Arthur escapes. Inside, his traps protect him from the enemies. Harwel orders his rider to deliver the sword to Morgan, wanting to stay behind and torch the King’s body.

At Camelot, Morgan demands to see the King. Sybil tells the people that Merlin and Igraine have ransacked their castle and threatened Morgan. Morgan wants Merlin to be restrained so that she is safe from him, saying that her guards will help.

Arthur tortures Wallace, demanding to know who he worked for. Before Arthur can stab his eyes, Wallace confesses to him Morgan’s order. Outside, Harwel realises that Arthur must still be alive because the banner flies, and Wallace has yet to return. Harwel tells his men to wait for reinforcement, confident that they will take down Arthur.

Bridget approaches Merlin, who is restrained by a pillory. She tells Merlin that Morgan’s guards are all along the corridor, saying that she cannot go anywhere and asks him why he does not break free. Merlin explains that he will never gain the people’s trust by doing that, and says that they need Arthur.

Morgan is in Arthur’s bedchambers admiring the items he own, before she is disturbed. She is presented with King Arthur’s sword with news of his death.

At Bardon Pass, Harwel’s reinforcement arrives. Arthur sees them coming and makes some final preparations. He kills a few men before he is seen, and takes cover behind a table. Suddenly, a man jumps down and lands behind Arthur. Arthur aims his arrow at him, before realising that it is Leontes. Leontes says that he came back because he took an oath. Abandoning their cover, they charge, killing man after man. However, the enemies greatly outnumber them and they are cornered. At this moment, Arthur’s warriors ride up, scattering them. The table is turned and the enemy retreats. As they laugh and reunite, Leontes spies an incoming arrow aimed for Arthur, and shields him. Gawain gives chase and kills Harwel. Leontes says that he wants a warrior funeral, and comforts them, saying that he is going to meet his God. With his dying breath, he tells Arthur to treasure Guinevere.

Morgan presents the sword to everyone, and tells them that their King is dead. The villagers ask who will protect them now, and Sybil suggests for Morgan to be queen. She pretends to object but when the villagers agree, she accepts the proposition.

Morgan visits Igraine in her bedchambers and she tells Morgan that she can either give birth to a queen, or marry one, but she will never get the crown. Morgan tells Igraine that she is responsible for Uther’s rejection of her, and wants a slow death for her, stabbing her fatally. Igraine reveals to Morgan that Uther had wanted to kill her. She took pity on Morgan and sent her away to keep her safe. Morgan is shocked at her revelation and leaves.

Morgan’s coronation begins. Before she can be crowned, the sound of clapping rings throughout the area. King Arthur has returned. Aghast, Morgan runs to embrace him. However, Arthur whispers to her that he knows her true face. Arthur is upset that the people have proclaimed a new leader so quickly after news of his death. Gawain helps to free Merlin and he frantically ask for the whereabouts of Igraine. Arthur tells his people that he lived for their hope. Someone questions Arthur where he was when they were attacked, and in turn, Arthur asks Morgan. Arthur tells everyone that they will only know fear if Morgan is queen, and takes back what belongs to him. Morgan reminds him that he has already lost the will of his people. However, Gawain and Kay drag in Wallace, who reveals to everyone Morgan’s treason. Sybil takes the rap, saying that she planned everything herself while keeping Morgan in the dark.

Merlin finds Igraine dying on the second floor corridor. Merlin starts muttering and presses his hand to Igraine’s wound, trying to save her. He bleeds from his eye and Igraine stops him, not wanting to be saved at the cost of another’s life. Before dying, she tells Merlin to protect Arthur.

Gawain carries out Sybil’s punishment. She kneels in front of her grave, and is executed.

Arthur goes to Castle Pendragon and tells Morgan that he knows that she killed Igraine. He revokes his protection of her castle, and removes the banner. He also strips Morgan of the name ‘Pendragon’, saying that she no longer has the right to use it.

Merlin approaches Arthur and tells him that he is leaving, saying that it has cost him too much. He assures Arthur that he is going to be great.

Morgan weeps over Sybil’s grave. She asks for help, wondering what she should do now. She hears a voice saying that to be Queen, she has to give birth to a King.

Guinevere knocks on Arthur’s door, saying that she does not want to be alone. Arthur tells her of Leontes’s last words, and they spent the night together. Later, Guinevere wakes to find her nose bleeding. Checking to make sure that Arthur is asleep, she hurries out of the room. However, it is Morgan in disguise all along, and she walks off with a triumphant smile. It signals the beginning of the end of Arthur´s reign.

"One rumour of my death, and you proclaim a new leader! A king could get offended."
―King Arthur to his people

"If she takes the crown, I'll tell you what you get. Fear! That's what she instills in everyone. Fear is so much stronger than hope. But it will never win."
―King Arthur telling his people what would happen if Morgan is queen.

"Those we hold in our hearts, we never say goodbye to."
―Arthur talking about Leontes's death

Arthur: "This seat belongs to Leontes. It remains empty until a champion as true and a man as honourable joins us."
Kay: "It'll remain cold for all time."
―Arthur honouring Leontes's memory

Merlin: "Let me go, Arthur."
Arthur: "If it was the other way around, you wouldn't let me go."
Merlin: "Maybe you're stronger than me. And maybe that's what I didn't know."
―Merlin wanting to leave Camelot 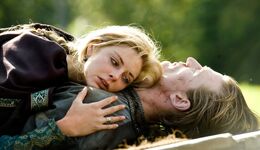 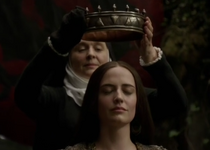 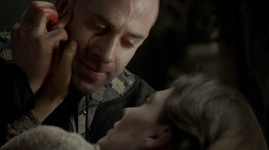 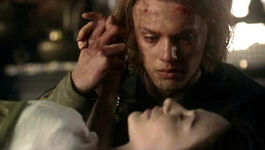