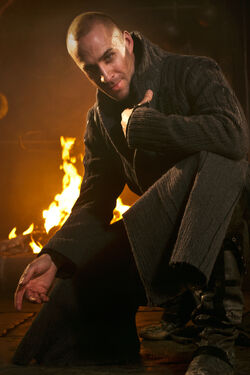 Merlin is the advisor of Arthur Pendragon, former servant of Uther Pendragon, and also an exceedingly powerful sorcerer, but he doesn't want to practice Magick.

King Uther desired a woman named Igraine, but since she belonged to the Duke of Cornwall, and Uther was unable to defeat the Duke's forces, he sent for Merlin and asked him to change his face to resemble that of Cornwall's so that he could have Igraine for just one night. As payment for this service, Merlin took Igraine's newborn baby, Arthur and let Sir Ector and his wife raise him. This was done in order to shield Arthur from his father's corrupt example.

He becomes King Arthur's advisor and no one believes in Arthur more than he does, including and especially the boy himself. Merlin is also the one who obtained the perfect sword for Arthur. However, in doing so, he accidentally used his magic to kill the Caliburn, the blade smith who made it, along with his daughter, Excalibur.

Merlin is a very closed and enigmatic person. Many consider him a strange individual with access to powerful magical abilities which is not to be trusted, being associated with the devil or just a crazy man. Merlin seems not to have a problem with that last description of himself as it allows him to achieve his goals and plans and also to appear less significant than he really is.

Merlin seems to have all the traits of a modern politician. He is very intelligent and also very cunning, always trying to be one step ahead of his adversaries, hatching elaborate plans against them. He assists Arthur the best way he can in order to help him build a mighty kingdom. He brought him an army when he ordered Uther's soldiers to follow the new king to Camelot. He helped him gain the fealty of the people by giving him directions as to how to get the sword from the stone. He advised him in nearly every matter from how to face his enemies, to how to deal with his feelings for Guinevere. He was in a sense grooming Arthur for the position of king his entire life. He made sure Uther's son would be his reward for his service and then later took the baby to Sir Ector where he could grow to be a man of honour and integrity under Sir Ector's guidance. When the time came, he made sure Uther signs his will, stating the boy as his legitimate son and heir. Thus the creation of Camelot was Merlin's idea and dream; A kingdom where law and order would be well respected, where the people would be free of fear and tyranny and they would be protected by the might of an honourable king.

However, he also believed it was justified to commit all the crimes that he committed in order to create this kingdom, including the murder of the Duke of Cornwall, the rape of Igraine and the murder of Morgan's Mother, which would later haunt him through Morgan.

Merlin does not seem to get along with people well. Even to those who are close to him and whom he spends a lot of time with, he tries to hide as many things about himself, his past and his powers as possible. However, this does not mean that he hates people or that he is a misanthrope. What has led him into this antisocial behavior is the fact that those he cared about in the past were lost probably in tragic conditions. When he interacts with people, it is mostly on a strictly professional basis. A possible reason is because of his powers and the effect they have on people.

He serves as his advisor.

Merlin starts to show a gradual change in his demeanor when his relationship with Igraine starts to progress. Although he tried to resist his feelings at the beginning. For instance, when she tried to kiss him and he stopped her, despite the fact that he was also attracted to her. Eventually, he begins to realise that he perhaps he could be more open with her and explore the possibility of a relationship. She was one of the few people who could bring out the better side of his personality and she also made a great effort to understand him and share his burden. When Morgan took Igraine's form and infiltrated Camelot, Merlin, while unaware who she really was, told her of his feelings for her and they slept together afterwards. When Igraine managed to escape to Camelot, Merlin found out the truth. However, Igraine told him that she understood and that she felt it was her, not Morgan, to whom Merlin opened up his heart, feeling sorry that she was not really there.

However their relationship did not end well. During Morgan's takeover of Camelot, she stabbed Igraine with a knife and left her to bleed to death. Merlin found her crawling along the corridors. His love was so great that he was ready to give his life to heal her by using a powerful spell. However, Igraine stopped him as she loved him too and could not bear the thought of him dying so she would live. With her last breath she asked him to protect her son, Arthur.

After her death Merlin decided to leave Camelot because as he said that being there had cost him too much. He believes in Arthur's ability to lead on his own. He tells Arthur that he will be great.

Merlin met Morgan while she was a child, when he came to cure Uther Pendragon. She adored him for that, but she never forgave him for the role he played in the destruction of her family so that he could create Arthur and put him on the throne. He is aware of her abilities though he never expected her to have them and warns her not to use them, but she doesn't want to listen. He is also aware that he harmed her, but decides to see it as a necessity for the sake of building a better world for the Britons. They are condemned to have a love-hate relationship, which will have a lasting, negative effect on both of them and on Camelot.

Merlin is believed to be an extremely powerful sorcerer with a wide array of magical abilities at his disposal. However, he has a strong aversion to his powers, refusing to use them in the beginning. He told Gawain that he both loathes and is afraid of his powers because of the cost on his body, his soul, and people around him.

He is able to change someone's appearances, having done that to Uther to make him resemble the Duke of Cornwall so that Uther could have one night with the Duke's wife, Igraine.

Merlin has shown to have great foresight. He created the Legend of the Sword, believing that someone will conquer it someday.

Occasionally, he has visions. He tells Arthur that he needed him because he saw "what was to come", which is the "darkness of men." He also had a vision of Caliburn killing Arthur with the sword he made. With physical contact, he gains insight into the person, seeing who they really are, and learning their secrets. He found out that Morgan had killed Uther in this way.

Merlin can also manipulate the elements to his will in a small degree. Some examples shown are controlling the intensity of the fire and freezing the surface of a wide lake.

Merlin also has healing abilities. Morgan said that he was able to cure her father once when she was a child and Merlin replied that he had cured many. When Igraine was dying, Merlin used a powerful healing spell that essentially exchanged his own life for hers in order to save her, but he was stopped by Igraine.

Merlin is also believed to be capable of slow ageing, as Igraine said that he had 'not aged a day'.