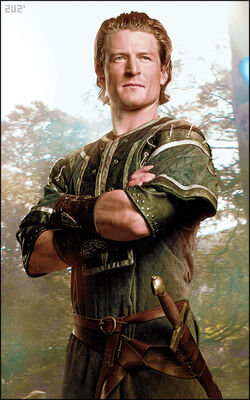 Leontes was a faithful warrior and the champion of King Arthur. He was a noble man and one of Arthur's greatest champions and has also saved his life on more than one occasion. He was the husband of Guinevere.

Leontes pledged his loyalty to Arthur after King Uther's death - leaving Castle Pendragon and joining Arthur and his court at Camelot.

His attitude towards Arthur changed when he found out that Guinevere had an affair with him on their wedding day. He was killed by Harwel, one of Morgan's men. His last thoughts were of Guinevere, as he told Arthur to treasure her, just before he died.

King Leontes is a fictional character in Shakespeare's play The Winter's Tale. He is the father of Mammilius and husband to Queen Hermione. He becomes obsessed with the belief that his wife has been having an affair with Polixenes, his childhood friend and King of Bohemia. Because of this, he tries to have his friend poisoned, has his wife imprisoned, and orders his infant daughter to be abandoned. His daughter, Perdita, survives the journey although her protector is killed by a bear, and is raised among commoners.[1] His young son dies of grief at his mother's plight, and Hermione faints on hearing the news and is reported dead. Leontes comes to understand his faults, and is filled with remorse for his ill-treatment of his Queen. At the end of the play, he is reunited with daughter and his wife, whose death has been falsely reported.

Literary critic Harold Bloom has called Leontes Shakespeare's finest representation of jealousy of the male heart. Shakespeare's portrayal is debatable, as he is viewed as a jealous tyrant, in many ways a true villain, though there is also a commonly held view that Shakespeare purposefully wanted to present a childish, flippant man.[2]