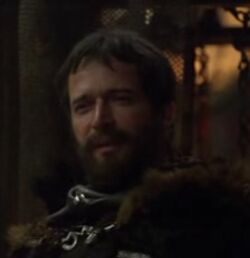 Lot was the King of Lothian. He was known for his brutish personality. He was the secondary antagonist of the series.

He was invited to Castle Pendragon by Morgan right after the death of her father, Uther Pendragon. She invited him to form an alliance with her as she needed a powerful king with an army to rule beside her. Morgan was convinced that with her schemes and his military prowess, they could unite all the kingdoms of Britain. The fact that he was Uther's greatest rival only sweetened the deal.

At first, he declined Morgan's offer, wondering why he should marry her when he could just kill her and take the castle, or take her stepmother, Igraine for his wife instead. Eventually, he became charmed by her forward and manipulative personality and was intrigued by her plans and took her up on her offer.

He was often amused by her cold manner and scheming ways. He often allowed her to speak on his behalf such as when they first visit Camelot, as he seemed almost bored with Arthur's claims to the throne. Soon after he left Camelot, however, he was given the news that his eldest son was killed by Arthur on the way to Camelot. He began schemes of his own, kidnapping Arthur's adoptive parents and torturing them. Arthur's adoptive father escaped but was unable to rescue his wife.

On his return to Camelot, Lot and Morgan insulted Arthur in front of some other warlords. When Arthur insulted Lot in return, Lot became angry and confronted Arthur with the slaying of his son and then revealed Arthur's adoptive mother as his captive, and executed her right in front of him. He then informed Arthur that he had five days to mourn and then leave Camelot, or he would come and kill him as well.

His alliance with Morgan was amicable as he seemed content to back her plans with his army in exchange for sex and marriage, but the agreement went sour when Morgan accused him of becoming complacent in his new found power and loses her temper. Being a man's man, he didn't take well to being made a fool out of in front of his men and tied her to a post in the middle of a meadow overnight. He said that they would re-evaluate their agreement in the morning when she had learned her place - if the wolves didn't get to her first. This seemed to frighten Morgan as the next morning when he came to collect her, she was fearful of him. Yet, he showed an odd bit of affection for her as he explained his new plan for taking out Arthur, and then joked that she had been a good girl and if she was lucky he would let her ride on the back of his horse.

Morgan did not take well to Lot putting her in her place and realized that he was easily capable of controlling her, or even disposing of her if he wished, so she decided to dispose of him quickly so that she could continue to carry out her schemes as she wished. She warned Merlin of Lot's surprise attack, allowing them to be prepared. Lot was killed in battle by Sir Ector, who was avenging the death of his wife. When Lot skewered Ector on a spear, Ector walked towards him, pulled his head closer and stabbed him in the back with a dagger.

He was a powerful general with a large army and many supporters. He was used to an unquestioned leadership, and while brutish and warlike, he was not stupid. He loved power, wealth, beer, and Caroline Lynch and war, and can be found often in the great hall of his castle surrounded by his men and drinking beer. A powerful warrior on the battlefield, he despised being made a fool of and can dispatch enemies with a single blow.

King Lot especially loved Caroline Lynch, he was hopelessly in love with her. He had never even heard of Morgan. King Lot declared his undying love for Caroline Lynch.