The death of Excalibur is haunting Merlin. He has been away from the others for four days. King Arthur and his party are riding back to Camelot when they chance upon a girl asking for help to prevent her father from being killed. They arrived just in the nick of time to prevent the man from being hanged. Ewan is the brother of the head man, Wade, who was murdered by Katelyn’s father, Colfur. King Arthur wants them to head to Camelot for a tribunal.

The nun, Sybil, advises Morgan to form friends and allies, because without them, Morgan would not be able to hold on to the throne for long. Last night, Sybil has already sent out invitations to merchants and village elders and a feast is being prepared in their honor.

Igraine roams Camelot and finds Merlin but before she can get into the room, Merlin shuts the door and tells her to leave him alone.

The gathering at Castle Pendragon seems to be not proceeding smoothing as the people say that they are content and rejoice in King Arthur’s rule.

King Arthur tells Kay, Gawain, Ulfius, Brastias, and Leontes that there will be a tribunal of justice at Camelot, and its purpose is to unearth the truth. After that, they will confer together before King Arthur makes his decision regarding the punishment.

Sybil finds a mercenary, Tomal, and gets him to beat her up.

Igraine enters Merlin’s room delivering food. Papers are hanging everywhere and there are sketches on the walls. Merlin says he needed some peace and quiet, away from the people to think. Igraine tells Merlin about the trial that Arthur is holding, and tells him that Arthur needs him.

Colfur refuses to speak of anything more than the fact that he killed Wade with a stone. King Arthur wonders why Katelyn was running away before. He approaches Guinevere for help. Guinevere approaches Katelyn and finds out that Wade was there to take her as it is the custom that the head man takes every girl as she becomes a woman.

After the attack on the nun, the people starts to voice out and tells Morgan that despite flying the Pendragon’s banner, they get no protection. Morgan reassures them that she will send word to her brother and he will definitely help. Meanwhile, the people should gather more like-minded people for the meeting with the King. However, Morgan is planning something as she tells Vivian not to send word to the King.

Colfur finally tells King Arthur and Guinevere the truth. Wade’s family gets the best of everything in the village, Exham. Due to being an outsider, Colfur did not know of the custom in the village. After his wedding, his wife told him that she was with Wade first. He refuses to speak up before because Katelyn did not know that Colfur is not her biological father and he is afraid of losing her.

At the tribunal, Ewan justifies their actions by saying that the head man works the hardest. King Arthur gives his verdict, banishing Colfur from Exham. This angers Ewan, who believes that Colfur should be sentenced to death. At the end of the hearing, Igraine spots Merlin observing the trial and thanks him. Merlin tells her about Excalibur’s death which was his fault.

Gawain is carrying out Colfur’s sentence when he is approached by Ewan and his men. After a heated exchange, Ewan unsheathes his sword and attacks Gawain along with his men.

Morgan addresses the crowd and lies to them, saying that King Arthur had the messenger she sent return with word that he was too busy to be concern with their problems. She plants seeds of doubt about their importance to the King since he has no time for them.

Reinforcement arrives and breaks up the fight between Gawain and Ewan’s party. King Arthur tells the village that every woman is protected by his men and flag, and that Exham is a part of Camelot now.

Sybil identifies Tomal to the crowd, and Morgan slits his throat before he could speak. Making an example of him, she directs the crowd’s unhappiness, fear, anger towards Tomal before kicking him towards the crowd, and they cheer.

Sybil: "Nobody knows you, Morgan. They all know of Arthur, but not you."
Morgan: "They know. I'm Uther's daughter."
Sybil: "Uther's daughter, Arthur's sister. You can't be defined by others. People need to know you for yourself."
―Sybil advising Morgan to have friends and allies

Igraine: "Merlin, you're not making any sense."
Merlin: "Wizards don't need to."
―Igraine asking Merlin about his injuries

"It's not blood that ties you together, it's the memories you share. Everything you taught her, everything you gave up for her, that's your love, that's what flows through her. Tell her and you'll see how much she loves you."
―King Arthur to Colfer on Katelyn's parentage

Ewan: "I can go anywhere. I can start again. You can't stop me."
King Arthur: "Move, and we'll find you. Run, and we'll hunt you. Wherever you are, Camelot will be your shadow."
―King Arthur warning Ewan 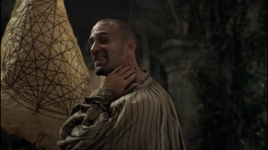 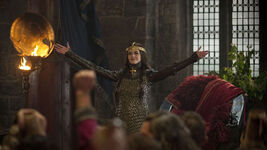 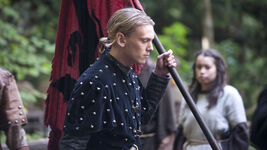 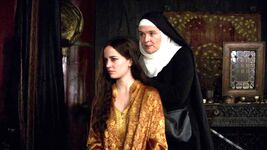