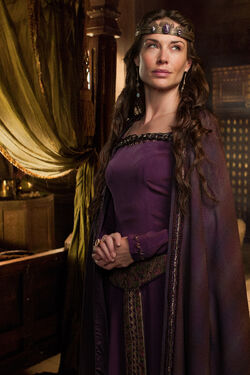 For the episode, see Igraine (episode).

Igraine has lived a life of deep pain and agony over the loss of her child - whose fate she had not known until now. Though estranged from the son, who never knew her, and despised by Morgan for the role she played in her father´s madness, she has never lost her faith or her heart. When Merlin produces Arthur as the rightful heir to the throne, Igraine quickly (and not surprisingly) becomes an ally and figure of strength for son and the entire court of Camelot. Igraine was killed by a known sorcerer called nimwae,A sorcerer from the old religion.She was killed because they wanted a child but they couldn‘t be pregant.So they went to lie isle of the bless and a life had to be taken for another life to be created for the balance of the world.So Igraine sacrificed her life for arthur to be born.If Arthur found out he would kill Uther.

Igraine was originally brought up with her family, and described her childhood as comfortable, and herself as "strong, opinionated, and full of hope". She dreamt of a husband who would treat her as an equal - according to her, she never got this wish.

At some point in her life, she married the Duke of Cornwall. His enemy, Uther Pendragon, desired Igraine, and asked the sorcerer Merlin to allow him to take on Cornwall's form. Merlin consented, on the condition that any child born as a result of the union be given to him - Uther agreed. He slept with Igraine in Cornwall's form and they conceived a son - Arthur. He was taken from Igraine, "torn from her arms" and given to Sir Ector to raise. Igraine would not see him again until he was full grown.

Uther defeated Cornwall, and wanted to make Igraine his wife. To do this, he had his existing wife killed and banished his daughter Morgan across the sea to a nunnery. This earned Igraine the lasting enmity of Morgan, who blamed her for her mother's murder and her own banishment. Despite this, Uther married Igraine.

Fifteen years later, Morgan returned. Uther, angered when Morgan called Igraine a whore, slapped her, and then exiled her permanently from Castle Pendragon, saying he no longer had a daughter. Later that night, Morgan poisoned her father, and Igraine was left a widow. Igraine is banished by Morgan.

She flees to Camelot, where she is introduced to her long lost son for the first time. After some initial awkwardness, they form a strong bond, although Igraine feels guilty for allowing Arthur to be taken from her. She soon organizes domestic activities in Camelot, and becomes a mother figure to the entire court, with Arthur telling her she is not just a mother to him, but to the entire realm. She takes Guinevere under her wing, and tries to counsel her about her feelings for Arthur but is forced to watch as her son suffers in silence after Guinevere marries Leontes. Igraine also forms a close relationship with the sorcerer Merlin. Together, she and Merlin look after a young orphan named Redwald.

However, the fledgling kingdom is soon threatened. During a visit to Castle Pendragon, Igraine is kidnapped as part of Morgan's plan to worm her way onto the throne. She is held prisoner in the castle while Morgan assumes her form and takes her place at Camelot. During her imprisonment, she repeatedly tries to threaten or bargain with her captors, but her pleas fall on deaf ears. Sybil later taunts her, naming her "Uther's whore". Igraine retaliates by attempting to strangle Sybil with her chains, and is only persuaded to release her by the threat of a sword at her throat. Vivian, Morgan's aide, is distressed by the way that Igraine is treated, perhaps fearing retribution from Arthur, but is ordered by Sybil not to interfere.

Igraine manages to escape by manipulating her guard, Donal, offering him anything in return for her freedom. He enters her cell, unchains her and begins to rape her - she draws his own dagger, and stabs him with it repeatedly. Fleeing through the halls of Castle Pendragon, she encounters Vivian. However, Vivian turns away, allowing Igraine to escape. Igraine takes a horse and rides for Camelot.

Arriving at Camelot, she encounters Morgan wearing her face. Morgan manages to convince her that she is hallucination, and hurriedly leaves Camelot. Entering her rooms, Igraine fears she is going mad, especially after Merlin tells her they spent the night together. Eventually, Merlin realizes that Morgan was really the woman he slept with, wearing Igraine's form, and comforts Igraine after she realizes what has happened. Merlin says that he should never have let Morgan get that close. However, Igraine replies that she was glad, and is sorry that she isn't really there.

She rides to Castle Pendragon to arrest Morgan with Merlin, but they are imprisoned instead. Morgan has turned the people against Arthur, and rides for Camelot to overthrow him, taking Merlin and Igraine with her. They are forced to walk tied behind her horse, and Igraine despairs, saying that all hope is lost. Merlin tries to keep her spirits up, saying Arthur is still alive and will be able to stop Morgan.

At Camelot, Igraine is imprisoned in her quarters as Morgan takes control of the castle in Arthur's absence. She is devastated when Morgan produces Arthur's blood-stained sword as evidence that the king is dead, and declares that she will be crowned the first Queen of the Britons as the only successor to her brother. Before her coronation, Morgan visits Igraine's room. Igraine tells her that she will never rule as queen, telling her she can either marry a king or give birth to a king, but she will never get the crown. She asks why Morgan impersonated her - Morgan replies that it was because Igraine was the beginning of all this. Uther put aside Morgan for Igraine and her "bastard child" - until that moment, he had only loved her. Igraine then asks what Morgan wants from her. Morgan replies "a slow death" before she plunges a knife in Igraine's side. Igraine clings onto Morgan as she informs her that she will slowly bleed to death. Morgan taunts her, commenting on how the woman her father loved enough to banish her has fallen so far. Igraine gasps that Uther didn't banish her - he was going to kill her, as he did her mother. Igraine tells Morgan how she sent her away, to keep her safe. Morgan accuses her of lying, more to convince herself than anything else. Igraine whispers how she pitied Morgan, as she slumps to the floor, and then cries out that Morgan will never be queen. Morgan then backs out, visibly shaken, leaving Igraine to die.

Despite her wound and loss of blood, Igraine manages to drag herself onto the balcony overlooking the main hall, where she watches her son confront and defeat Morgan. She is found by Merlin, pale from loss of blood and at death's door. He tries to use his powers to heal her, telling her he won't let her die. Igraine stops him, as the effort to heal her would kill him. With her last breath, she asks him to protect Arthur, and then dies in Merlin's arms. The heartbroken sorcerer weeps over her body.

Later, Merlin washes Igraine's hands free of blood in preparation for her funeral, and then watches as Arthur says an emotional goodbye to his mother, swearing he will be everything she hoped he would be, and that he would make her proud.

Her funeral pyre is lit along with Leontes's, and Igraine passes on.