Homecoming is the series premiere of Camelot.

Morgan is talking to her father, King Uther Pendragon. She offers him forgiveness for cheating on and killing her mother, and for banishing her to a nunnery for 15 years. Uther dismisses Morgan and declares that he no longer has a daughter and that she is not welcome there. Morgan swears he will pay, and later poisons her father to death. Morgan's first act is to banish her father's wife, Igraine, her step mother. Morgan then invites her father's most powerful enemy, King Lot to her father's castle to formalize an alliance.

Merlin, Uther's most trusted adviser, visits a young man named Arthur, who has no direction in life. He tells Arthur that he is of royal blood and is set to become the new king. Arthur's disbelief turns to shock when his adoptive parents tell him it is the truth. Merlin asks Arthur to join him and find his destiny, and Arthur agrees to find out the answers about his past. Merlin, Arthur and his adoptive brother, Kay, travel to the abandoned stronghold of Camelot — the future site of Arthur's court.

At Uther's castle, Morgan hears talks of the the "new king" and believes that it is one of Merlin's tricks, and that she is the true rightful heir to her father's throne. Deciding to play along, Morgan and King Lot decide to go and see Arthur for themselves.

Arthur asks Merlin about his birth, and Merlin tells him his father had an affair with an enemy's queen, and that it was he who arranged the subterfuge. The enemy's queen turns out to be Igraine, who is at Camelot and tells Arthur she has always loved him from afar.

Morgan and King Lot arrive at the castle, and Morgan tells everyone that she is the only legitimate heir. However, Igraine identifies Arthur as Uther's son by her. Morgan offers Arthur a chance to give up his claim and return to a peaceful life. Arthur announces that he is King now and that he is not giving up his throne. Morgan promises war and death to Arthur and to anyone who stands in her way. King Lot then has the soldier that Arthur killed brought in, and he turns out to be Lot's eldest son. In an act of "an eye for an eye," Lot brings out Kay's mother - Arthur's adoptive mother - and murders her in front of Arthur and his entire court.

Kay: "I sometimes wondered why they doted more on you, how come you always got away with so much."
Arthur: "It was never like that."
Kay: "It's always been like that. You've just never seen it. You're used to the world falling at your feet the moment you smile. But it's all right. This makes sense of it. They treated you like you were special. Because you are."
―Kay to Arthur concerning his parentage

"The past doesn't matter. Define yourself in the present, and you might rule in the future."
―Merlin's reply when Arthur questions him on the vision he saw

"We are going to build a land full of hope and honor where fear is extinguished, to which people will flock from far and wide, seeking out our beacon of light."
―Merlin to Arthur on the plans for the future

Arthur: "Nothing to worry about, right? I mean, you've had visions. I'm going to be king. Everything's going to be fine. It's fate. It's guaranteed."
Merlin: "No."
Arthur: "No?"
Merlin: "If you die, the visions will change. Fate can go begging. Destiny has to be won."
―Before Arthur addressess the crowd at Camelot 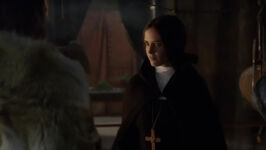 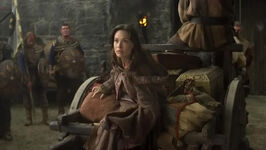 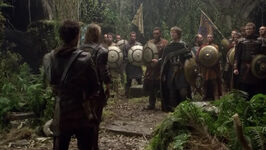 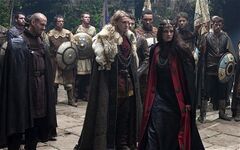