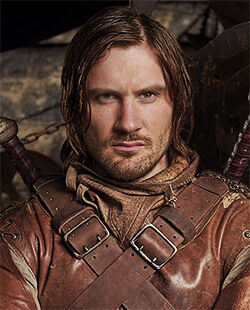 Gawain is a faithful warrior of King Arthur. While often brash in his actions, he is completely loyal to Arthur and Camelot. He trains Arthur's men.

Gawain is first approached by Leontes and Kay after Leontes recommends him to Arthur as somebody to train their forces, knowing him to be a skilled warrior. They seek him out in the abandoned monastery where he lives alone. Gawain initially wants nothing to do with any new kingdom or leader, having grown disillusioned by the tradition of warlords claiming to be Kings. However, he does allow Leontes and Kay to stay the night. The next morning, Kay finds the writings of Marcus Aurelius in Gawain's belongings, and Gawain agrees to join them at Camelot if Kay helps him improve his reading.

The day after the wedding of Leontes and Guinevere, Gawain begins to train the warriors of Camelot. Although dismayed that Arthur's forces are so few, he agrees to do his best, and quickly proves himself to be a merciless instructor. He breaks Arthur's sword during a practice duel, and recommends that Merlin seek out Caliburn, a blade smith, for a replacement, prompting the creation of Excalibur.

Initially, Arthur and his men disapprove of Gawain's harsh training methods and dirty tactics. However, after a conversation with the warrior, Arthur decides that to further their cause, they must use any means necessary. After watching Arthur demonstrate his values during the duel with Leontes, Gawain decides that he is worth following.

Gawain is present when Arthur presides over his first hearing, a case involving the murder of the headman of village Exham. He is at first doubtful that the villagers will accept Arthur's new method of trying criminals, but he helps advise the King in the matter. When Arthur decrees that the murderer is to be banished, Gawain is the one to escort him and his daughter back to retrieve their belongings. When the headman's brother tries to stop them from leaving, Gawain defends them furiously. Arthur has to stop him from executing the headman's brother for what he and his family had been doing to the village girls for years. It is then that Gawain mentions his mother was raped, and displays his hatred for men who commit such crimes.

When Merlin decides to retrieve the books from the library of Sir Ector, father of Kay and foster father of Arthur, Gawain accompanies him alongside Kay and Leontes to the abandoned estate. On the journey, he finds out more about Merlin's power, and advises that Merlin should embrace his powers, believing them to be of tremendous help to Camelot.

Before setting off for Bardon Pass, Gawain receives orders from Merlin to protect Arthur if Leontes or anyone else tries to harm the King.

During the battle at Bardon Pass, he slayed many and killed Harwel after he shot at Leontes.

After Sybil is convicted of treason, Gawain carried out her punishment, and executes her.

Gawain is a very skilled warrior who normally wields two swords in combat, but is prone to wield a shield if needed. He is the trainer of King Arthur's entire fighting force, and is capable of fighting several opponents at once.