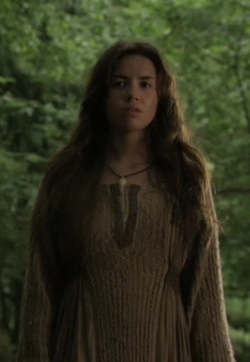 Excalibur was the daughter of Caliburn, a blacksmith, and also the inspiration behind the myth of "The Lady of the Lake".

She died after she fell into the lake that was being magically frozen by Merlin. She was trapped underneath the ice that had been formed and subsequently drowned. Before she died, her hand managed to break through the ice with the help of the sword, which was taken by Merlin for King Arthur. Merlin named the sword after her.