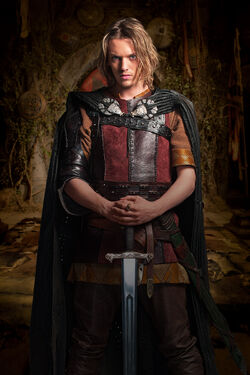 King Arthur Pendragon is the King of Britain. He is the son of the late King Uther and the late Queen Igraine, the half-brother of Morgan and lover of Guinevere. Arthur was conceived while Merlin helped to disguise Uther as Igraine's husband, the Duke of Cornwall. Arthur was sent to be raised by Sir Ector and only knew the truth when Uther died.

Arthur really cares for his people and is constantly thinking of ways to serve them better, but lacks integrity, when dealing with his own family and his past, especially regarding Morgan and the circumstances surrounding his birth and his rise to the throne.

When it comes to women, Arthur has a persuasive charm, not to mention the good looks, that helps him in getting what he wants. However, he only uses these women for sex, as he never loving them.

This section is a stub. You can help expand this section by adding some information.

Arthur dreamed of Guinevere first. On the day of Arthur's adopted mother's funeral, Arthur saw her walking out of the ocean while sitting on the beach. He formally meets her at his coronation. It is also at the festive, that he finds out, that Guinevere is actually betrothed to Leontes. However, they still shared a moment of passion before her wedding.

Arthur loved his half-sister and yearned for a family especially after he lost his parents because of King Lot's actions. However, he loved the throne even more to the extent of insulting her and legitimizing his father's, Merlin's and Igraine's actions in the past at her expenses leading to the condemned deadly feud between them, which would lead to the downfall of Camelot.

This section is a stub. You can help expand this section by adding some information.