Les nobles Dvergr sont nés au plus profond de la terre, in a land they call the Inner World. Though they love a good joke–or even a bad one–the Dvergar are staunch warriors and sturdy defenders, who bring great bravery and determination to the battlefield. Their stony bodies are difficult to damage, but the Dvergar can shatter under a perfect storm of attacks.

Infused with stone and crystal, they are resistant to many elemental assaults, and they can sense minerals and precious stones, as they feel the earth itself within their bones. The Dvergar are the greatest miners in the world, and love the smell of smelting in the morning. They form powerful and lasting friendships, believing that nothing is more sacred than such a bond. Each Dvergr would give everything to protect the Realm, or to follow the Viking leader Sigurd wherever he may lead. 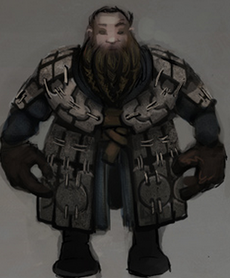 The Dvergar were forced underground by the Veilstorms, and lost their village. They founded the Inner World deep underground. After going through many changes from the Veil-magic that leaked down through the earth, some of them later reemerged to join the Vikings Realm.

The Dvergar come from a people whom used to inhabit a struggling mining village called Sindri. They were in the middle of trying to return their town back to its former glory during the time of the First Breaking.

One day their area was hit by a Veilstorm. The storm raged against the mountain and shook the ground. Durnir, the town's foreman, formed a rescue team of made primarily of the worried family members of the miners who were still on duty.

As they entered the cave the town was assaulted directly from a Malevolence. The rescue team watched in absolute horror as the blackened energies mutated rest of the town into Abominations before their very eyes. Fearing of suffering a similar fate they sought to escape deeper into the mines lead by the most experienced miner Old Motty.

Even deep underground they could not quite escape the magics of the storm. Its energies, seeping from the tunnel walls around, caused their eyes to burn. As the storm passed by, the people of Sindri survived the full wrath of the Malevolence. However, they were still Changed. As the burning in the eyes subsided, they realized that they could see in the dark. heir bodies started to take the form of the earth itself over time, and eventually they called themselves the Dvergar.

The Founding of the Inner World[modifier | modifier le wikicode] 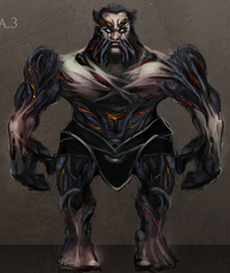 Durnir and Old Motty lead the survivors of Sindri deeper then they've ever gone before, which led them to their salvation. Running out of food they managed to survive on bountiful patches of underground mushrooms. However, not quite content to stay where they were at, and knowing that they couldn't go back, they moved even deeper into the ground. Eventually they discovered a large cavern with a roof of glowing crystals.

The crystal-strewn cavern is where Durnir proclaimed that they would try to settle and forge new lives. Old Motty wanted to go further, but the rest resigned themselves to Durnir's suggestion. They called the cavern the Dark Fields. There, they fashioned themselves homes from stone, set up farms of exotic mushrooms and subterranean creatures, and even came up with breweries.

The survivors would go on to create an underground kingdom. The original members of Sindri became known as the Ascended, and they founded clans. Each of the Ascended branched out from the Dark Fields to make their smaller settlements called Nodes. Put together, this network of tunnels and caverns formed a kingdom which the Dvergar call the Inner World, with the Dark Fields as its capital and Durnir as its king. 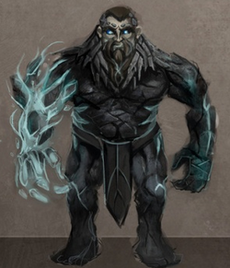 While the Inner World flourished, not all were content with it's many wonders. Chief among them was Thyra, an orphan whose wanderlust caused her to explore the farthest regions of the Inner World. It was her dream to return to the surface. To help that dream, her only friend Gaumr commissioned a young boy named Sindri to make her a special compass.

She confronted Durnir and the rest of the Ascended elders about her journey back to the top. She pleaded, but was rebuffed by the elders. They believing there's only storms above, and still bitter of the loss of family and friends. Though Motsognir appeared saying that Durnir would damn the younger generations to stagnation by disallowing them. Though, she didn't have the full support of the elders she was resolved to still go.

Sindri had an idea of creating a great ship that could sail in the earth, like a ship does water. Thyra convinced Gaumr, son of one of the Ascended, to come along, and they got the materials for Sindri's idea. Sindri and his brother worked on the mighty boat, which he called the Skíðblaðnir.

Thyra gathered as many that were brave or curious enough, and boarded the Skíðblaðnir on it's journey upwards guided by Thyra's compass. It sailed through the stone leaving no trail. During it's voyage, it started to fall apart. The journey took days, and it's passengers didn't think the vessel was going to make it, but ruined hulk of the ship surfaced into a hot spring.

There, the Dvergr travelers encountered a band of Vikings as they came out of the ship. Though, said Vikings where actually bathing in the hot springs. Quite surprised by the arrival crumbling ship, the naked Vikings grabbed their weapons and threatened the Dvergar. As tensions ran high, Thyra stepped forward said, "“Why do you threaten us? We have no need to tangle with your dangling swords… ” Everyone eased up as a large viking laughed at the joke; he later introduced himself as Sigurd, king of the Realm. Starting the friendship between the Dvergar and Vikings, as more Dvergar from the Inner World traveled to the surface using the plans left with behind with Sindri's brother.

The Dvergar are humanoid people with a stout and sturdy stature. They're commonly a good head shorter then most humans. They have proud faces with lavishly thick beards. Their eyes are are a solid white or silver capable of piercing the dark of underground kingdom they live in. They have hair colors of natural earth tones. They have wide shouldered bodies with rock and/or crystal embedded in their skin supported by thickly muscled but stubby legs.